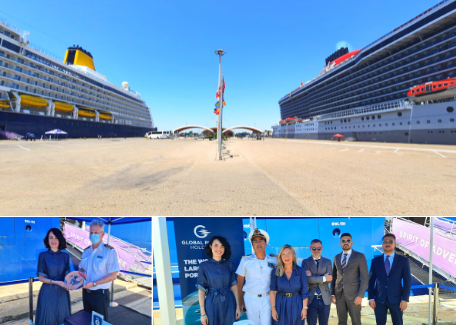 June 16th, 2022 – At 08:00 this morning, the elegant Spirit of Adventure, new ship of the English premium company Saga Cruises, entered the port of Cagliari welcomed by the staff of Cagliari Cruise Port for this first call in the Sardinian capital.

Berthed on the western quay of Rinascita pier, which today also welcomes, on the eastern side, the majestic Valiant Lady of the American company Virgin Voyages, Spirit of Adventure has seen its debut in the Italian port celebrated with a crest exchange ceremony held alongside and attended by the Marketing Manager of the Port Network Authority of Sardinia Sea, Valeria Mangiarotti, the Harbour Master of the port, C.V. (C.P.) Mario Valente, and the representatives of Cagliari Cruise Port and Italmar Sardinia.

236 meters long, with a draft of 7.6 meters and a maximum capacity of 999 passengers, this ship was built in the German Meyer Werft shipyard in Papenburg and delivered to the company in September 2020. Due to the pandemic, however, its debut was postponed to July 2021, which is why the ship is currently concluding its first year of operation. As a boutique ship, Spirit of Adventure - like Spirit of Discovery, its sister ship - offers exploratory itineraries in niche destinations, giving its (over-50s) guests an all-inclusive on-board experience, an almost personalized passenger service, restaurants with cuisines from all over the world and unforgettable excursions.

Today's is not the only Maiden Call scheduled this week in the port of Cagliari: on Wednesday 15 June, in fact, it was the turn of Star Pride, a 133-meter mega-yacht belonging to the luxury company Windstar Cruises, while on Saturday the cruise terminal of Cagliari Cruise Port will host the first call of Seabourn Sojourn, jewel of another luxury company, Seabourn Cruise Line.

All these Maiden Calls on Cagliari are an index not only of the rapid post-pandemic recovery of the cruise market in the island port, also testified by the numbers more than tripled compared to the previous season, but also of the growing importance of the Sardinian capital as a destination, result of the intense and incessant promotion work carried out in synergy by Cagliari Cruise Port, the Port Network Authority of Sardinia Sea and the Municipality of Cagliari.

“Our goal is to grow, in numbers and visibility - says Stephen Xuereb, president of Cagliari Cruise Port - “We are excited about these Maiden Calls, which show how more and more luxury cruises are being welcomed in Cagliari. It is a category of cruise lines with smaller ships, easy to accommodate in our large quays, but with a more demanding clientele, and their presence in our port demonstrates that the city and its territory are able to respond properly to the requests of this precious market. To increase the appeal of Cagliari, however, it is necessary to invest in the development of the port facility, planning interventions such as the expansion of the cruise terminal, necessary to meet the numerous berthing requests already received for future seasons, and the subdivision of traffic, so that the whole area of the old port is dedicated to the reception of cruise ships. The collaboration with the Port Authority, we are sure, will allow us not only to achieve our business goals, but also to give Cagliari its well-deserved role as a cruise destination of excellence in the Mediterranean landscape”.

“Three maiden calls concentrated in just three days and the multi-call of Valiant Lady on Olbia and Cagliari are confirmation that the signals coming from the market at the beginning of the year would have brought us back to the desired normality well in advance – explains Massimo Deiana, President of the Port Network Authority of Sardinia Sea – Even if we won’t reach the record numbers of the past years, we have nevertheless achieved the important goal of attracting new cruise lines to our ports, a trend that will allow, in a short time, to further amplify the appeal of the Sardinia System and open a new growing season for the market”.

Since the end of 2016, Cagliari Cruise Port has become part of Global Ports Holding (GPH), the largest independent cruise terminal operator in the world, with a consolidated presence in the Caribbean, Mediterranean and Asia-Pacific regions, including some large commercial realities in Montenegro. With an integrated platform of cruise ports serving cruise ships, ferries, yachts and megayachts, GPH operates 26 terminals in 14 countries and continues to grow steadily, providing services to 14 million passengers and reaching a 24% market share in the Mediterranean every year.