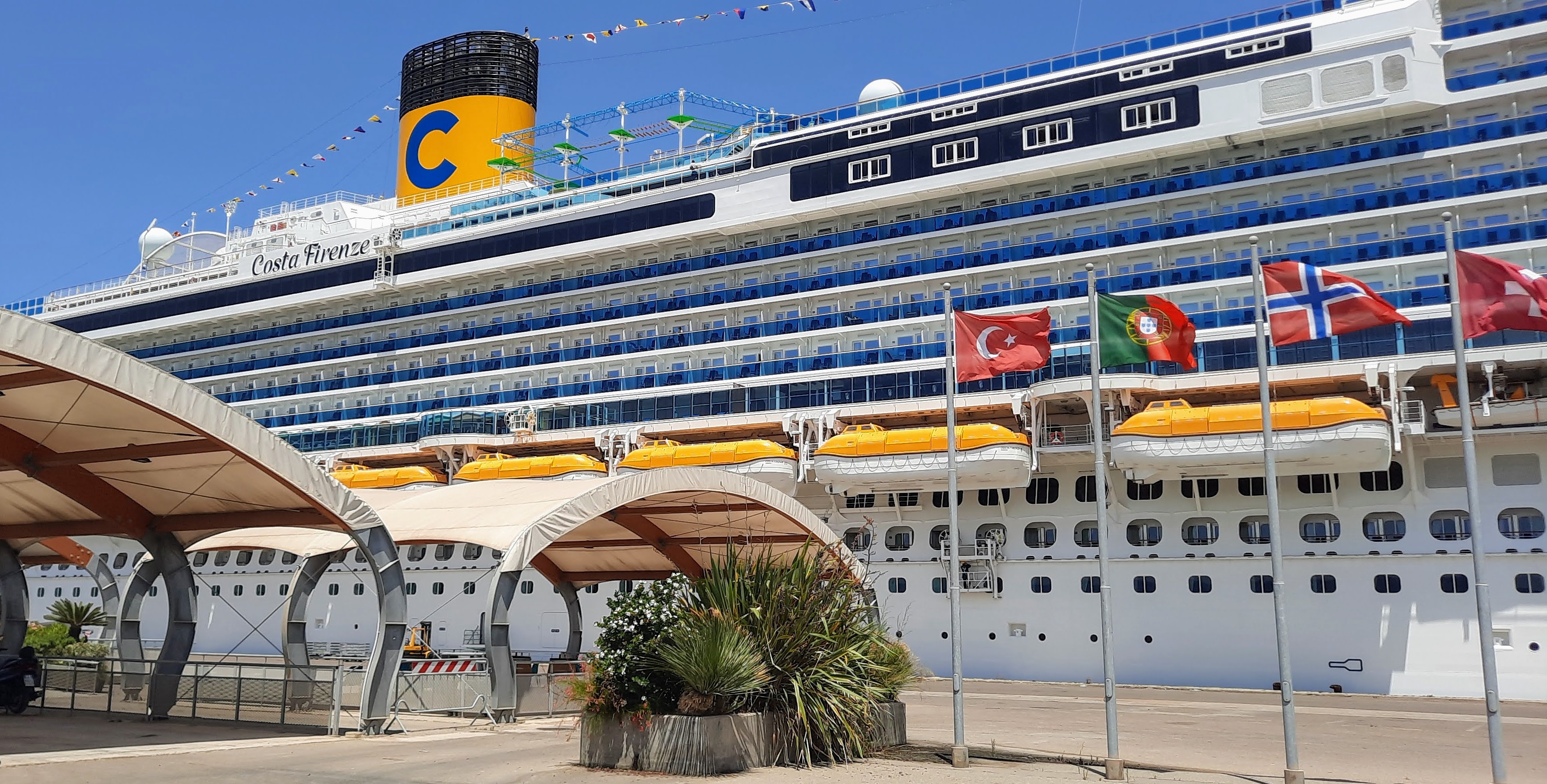 09/07/2021 – If Cagliari Cruise Port's winter was illuminated by MSC Cruises' calls, its summer wears the colors of Costa Cruises. After having hosted the Costa Smeralda calls on a weekly basis through May and June, Cagliari Cruise Port today is pleased to welcome the Maiden Call of Costa Firenze ship in the Sardinian capital during its very first cruise itinerary.

At the invitation of the captain, the local authorities joined the crest exchange ceremony, held onboard, which was also attended by management of Cagliari Cruise Port.

“Costa Firenze is the new flagship of Costa Cruises, the largest Italian cruise company, which once again focuses on Cagliari to fascinate its passengers with its magical itineraries in the Mediterranean Sea. For Cagliari Cruise Port, this call is an important demonstration of the centrality of the Sardinian port not only for the shipowner, but also within the panorama of Italian cruise ports”, said Antonio Di Monte, General Manager of Cagliari Cruise Port.

The newborn queen of the seas was built by Fincantieri and delivered last December with an unprecedented ceremony in live streaming. Initially, the departure was scheduled for the end of February, but the pandemic emergency forced the company to postpone until July. Christened in Savona at the inauguration of its first itinerary, the ship is inspired by the Florentine Renaissance for the style and elegance of its interior furnishings, while boasting excellent environmental performances and avant-garde technological innovations. With a gross tonnage of 135,500 tons and a length of 323 meters, it can accommodate up to 5,200 passengers assisted by 1,300 crew members. The Costa ship will carry out a Western Mediterranean itinerary throughout the summer.

Safety, health and prevention are guaranteed onboard by the Costa Safety Protocol, the pride of Costa Cruises, while on landside are in force the anti-contagion rules implemented by Cagliari Cruise Port, which have allowed the company to resume operations during the 2020 season and to obtain the "Safe Travels Stamp", a recognition granted by the World Travel & Tourism Council, the world's leading association in the tourism sector, which certifies the company's commitment to countering and containing the COVID-19 spread.

In late 2016, Cagliari Cruise Port has become part of the network of Global Ports Holding (GPH), the world's largest cruise port operator, with an established presence in the Caribbean, Mediterranean, Asia-Pacific regions, including extensive commercial port operations in Montenegro. Established in 2004 as an independent cruise port operator with a diversified portfolio of cruise and commercial ports, the group holds a unique position in the cruise port landscape, positioning itself as the world’s leading cruise port brand. With an integrated platform of cruise ports serving cruise liners, ferries, yachts and mega-yachts, GPH operates 19 cruise ports in 13 countries and continues to grow steadily. GPH provides services for 14 million passengers reaching a market share of 24% in the Mediterranean annually. The group also offers commercial port operations which specialize in container, bulk and general cargo handling.