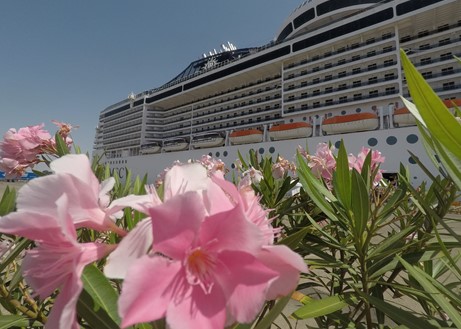 Next May the 1st, two large cruise ships will arrive in Cagliari, the MSC Divina and the MSC Opera, whose guests will have the extraordinary opportunity to watch the unique and unforgettable show of the 362nd edition of the celebrations in honor of S. Efisio, with the colorful procession, the "traccas" pulled by oxen and the many women and men that will wear for the occasion the beautiful traditional clothes with the peculiar characteristics of the different Sardinian places from which they come.

The return on board of the guests of the two ships at the end of the day will be delighted by a performance of traditional songs and dances by the "Gruppo di Cultura Popolare" of Monserrato city, which will take place at the cruise terminal of Molo Rinascita .

The presence of cruise ships in Cagliari on the "Festa del Santo" occasion, strongly desired by the Institutions, Authorities and local operators, is not only an absolute novelty in the history of the port and the City, but also represents the result concrete and tangible of the intense joint work carried out in recent months by the Municipality of Cagliari, by the newly established Port Network Authority of the Sardinian Sea and by Cagliari Cruise Port, which has recently become part of the great network of Global Ports Holding.

Global Ports Holding (GPH) is the most important independent operator of cruise terminals in the world with a consolidated presence in the Mediterranean, in the Atlantic and in the Asia-Pacific regions, including some important commercial ports in Turkey and Montenegro.

GPH manages a portfolio of 15 ports in 7 countries, where more than 3,000 calls of all companies are held each year.

From December 2016 GPH has become the majority shareholder of the Cagliari Cruise Port terminal and has begun to develop intense and fruitful collaborative relationships with the Authorities, Institutions, Entities and local business realities involved in the supply chain, with the aim of nominating the Cagliari port as Home-Port (place of start and end of cruise) for the companies with medium-sized ships.

In this perspective there is the hypothesis of the expansion of the cruise terminal, whose project is currently being discussed with the Port System Authority.