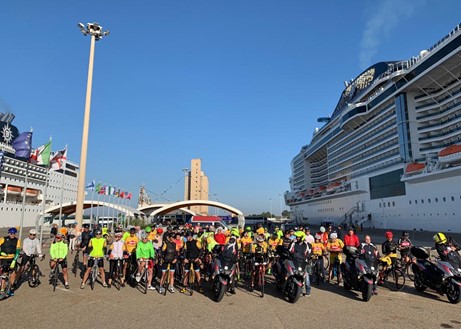 New record for Cagliari Cruise Port: October was in fact the most distinguished month with the multiple calls - a total of 10 calls, one of which involved 3 ships simultaneously - for a total of about 50,000 passengers. The extraordinary result is enriched by two "bike tours", organized on 13th and 23rd October respectively for the ships Mein Schiff 3 and MSC Meraviglia, which highlighted the peculiarities and sensitivity of the South Sardinia destination in terms of sustainable mobility and also provided an unexpected and welcome contribution to the City of Cagliari for its candidacy as the European Capital of Sustainability (European Green Capital).

Particularly important is the return of The World, the largest private residential ship on the planet, with 165 extra-luxury residences, and sails to reach the most wanted and desired destinations in the world along ever-changing itineraries. Nevertheless, to those who remember having already seen in the port back on December 4th and 5th 2013, this extraordinary sailing condominium, evidently thanks to the positive experience made in the past, to the attractions of the city and the territory and to the quality of services offered by Cagliari Cruise Port, is not only back but has also been moored for three days (from 27th to 29th October) and it has already planned to return again next year.

The 2019 year will be an important turning point for the further development of the cruise sector in Cagliari. With the aim of nominating the port of Cagliari as a Homeport (starting and ending point of cruise) for the Companies with medium-sized ships, Cagliari Cruise Port plans to implement the project for the expansion of the cruise terminal, already under discussion with the Port Authority Network of Sardinia Sea, with which, together with all the other Authorities, Institutions and local business realities involved in the supply chain, the cruise terminal has created intense and profitable collaborative relationships.

The project for the expansion of the cruise terminal and the arrangement of the surrounding areas also includes the implementation of the current operational capacity of the port about the control of passengers, to be achieved through a new dedicated and fully equipped structure, which will be built next to the "check point" of the S. Agostino gate. This planning corresponds to the operating standards of the great Global Ports Holding (GPH) network, of which Cagliari Cruise Port has been part for over a year.

GPH is the largest independent cruise operator in the world with a consolidated presence in Mediterranean, Atlantic and Asia-Pacific regions, including commercial ports in Turkey and Montenegro. With the recent addition of the cruise terminals of La Habana (Cuba) and Zadar (Croatia), GPH manages a portfolio of 17 ports in 9 countries, receiving over 3,000 calls each year.