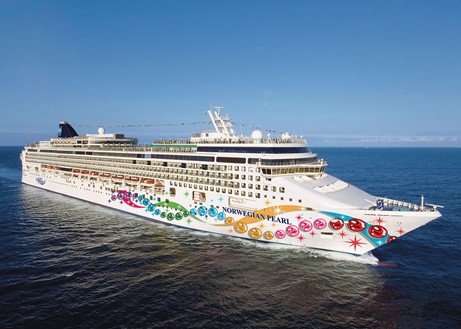 "The Boaty Weekender", this is the name of the festival organized by Belle & Sebastian group aboard the Norwegian Pearl cruise ship, which left yesterday from Barcelona and is about to reach our Italian port tomorrow at 7:00.

Four days of sea, music and fun in the western Mediterranean between 8th and 12th August, on board the colorful pearl of the Norwegian Cruise Line, in a route between Barcelona, Palma de Majorca and Cagliari, choice - for our pride - as the destination of this exclusive and sparkling summer experience.

Nearly 2,000 passengers - mostly British and Americans - more than 1,000 crew members and many celebrities will pour into the Sardinian capital tomorrow for a stop over twelve hours long; besides Belle & Sebastian, in fact, there are many groups present: Teenage Fanclub, Hinds, Mogwai, Yo La Tengo, Camera Obscura and others, ready to perform several times during navigation.

The inclusion of Cagliari in this particular itinerary represents the concrete testimony of the incessant job of promoting of the destination carried out by Cagliari Cruise Port, the company that manages the cruise terminal at Molo Rinascita.

Cagliari Cruise Port is part of the network of Global Ports Holding (GPH), the largest independent cruise terminal operator in the world, which boasts a consolidated presence in the Mediterranean, in the Atlantic and in the Asia-Pacific regions and which, with the recent addition of the cruise terminals of La Habana (Cuba), Zadar (Croatia) and Antigua (Antigua and Barbuda), manages a portfolio of 16 cruise ports in 10 different countries, where more than 3,500 calls of ships are held each year.